A memorial concert for The Honourable Jane Mathews AO with British Wagnerian conductor Maestro Anthony Negus and singers will be held at 7.30pm on Thursday 27 February 2020 at St Columba's Centre, Woollahra. Maestro Negus has very generously offered to contribute a musical evening in honour of his close friend and the Wagner Society's late President The Honourable Justice Jane Mathews AO.

He will accompany singers Laura Scandizzo, Eleanor Greenwood, Pamela Andrews, Hamish James and Timothy Nunn in a program of works by Wagner, Weber, Beethoven and Richard Strauss. Program details will be available closer to the event. The Society is grateful to Leona Geeves for organising the event.

Members of the public are welcome.

Refreshments will be provided.

Please RSVP to let us know how many are coming, by using the form here.

General admission entry - $40
You can pay by cash or card at the concert.

For members, pre-payment is preferred:
by e-invoice (upon request made in your RSVP)
or by electric funds transfer (details available here) 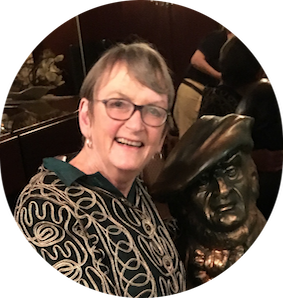 Jane discovered Wagner and his music several decades ago and was keen to share her enthusiasm for his operas amongst her numerous friends. She had a number of records, particularly of the Ring, and held many parties which would feature sessions listening to Wagner’s music. Guests would provide contributions of food and of course there was also wine to increase their enjoyment.

She enjoyed going to Bayreuth to meet other enthusiasts in the network of Wagner-lovers. She was elected President of the NSW Wagner Society (2010 - 2017) in recognition of her commitment. Her contacts in Australia and around the world were always encouraged to come and talk to our Society. Jane had been ill for a period and her death is a relief from pain. We will remember her as a great enthusiast for music, a long-term supporter of organisations such as the Sydney Symphony and Opera Australia, an extremely generous donor to music in Australia and a committed lover of Wagner’s operas.

(from the September Wagner Quarterly)

Anthony Negus studied clarinet and piano at the Royal College of Music London, and gained a music degree at Oxford University. He has worked with many opera companies and has a wide opera and concert repertoire. Working with the legendary Wagnerian conductor and coach Sir Reginald Goodall in the 1970s and 80s was a formative and highly influential period which led to his conducting Parsifal and Tristan und Isolde; and then assisting Sir Richard Armstrong, Rheingold, Siegfried and Gotterdammerung. He has conducted Parsifal for the New Zealand Symphony Orchestra in Wellington, and in Luebeck, Germany; after working with Vladimir Jurowski, Die Meistersinger von Nurnberg for Glyndebourne. Over many years as Music Director of Longborough Festival Opera, he has established himself as one of the most perceptive and original conductors of the Wagner repertoire, culminating in the highly acclaimed Ring Cycle in 2013, followed by Tristan und Isolde, Tannhauser, and Die Zauberfloete. The 2017 revival of Tristan und Isolde prompted unprecedented critical and audience acclaim.

In Melbourne, Anthony Negus conducted Melbourne Opera's Tristan und Isolde in 2018 and The Flying Dutchman in 2019. He was the Society's first guest in 2019.

Laura Scandizzo's operatic roles include Ariadne in Ariadne auf Naxos for Land of Enchantment Opera in New Mexico, USA and Donna Anna in Don Giovanni at the Varna International Opera Academy, Bulgaria. Laura is an alumna of the Pacific Opera Young Artist program and she has performed with the Opera Australia chorus in King Roger, Handa Opera on Sydney Harbour’s Carmen, The Nixon Tapes, Verdi Requiem, Aida, Turandot, and she joins them again for La Juive, Roberto Devereux, Aida, and Eugene Onegin in the 2020 Winter Season. She is also honoured to be the 2020 recipient of the Prue Kennard Career Development Scholarship.

The Wagner Society in NSW is proud to have sponsored Laura at the Varna International Opera Academy, Bulgaria.

Award-winning singer Eleanor Greenwood has sung on stage and on radio, in London, in the UK, in Europe, in Australia, and throughout China. A graduate of London’s Royal Academy of Music Opera School, and of the Australian National University, she has performed various roles and concerts, and is a winner of the Sydney Eisteddfod Opera Scholarship Competition. In opera productions Eleanor has been broadcast on BBC Radio 3, Schweizer Radio DRS, RTE Radio, Ireland and ABC Classic FM Australia.

Hamish James recently graduated from the Sydney Conservatorium of Music with a Bachelor of Music (Performance) where he was awarded the Bud Brown Memorial Scholarship for opera studies. In 2019 Hamish was a member of the Associate Artist Program with Pacific Opera. Singing as a boy soprano at a young age, Hamish discovered his passion for singing through the St Andrew’s Cathedral choir where he was also appointed head chorister and performed frequently as a soloist. Hamish is looking forward to commencing his postgraduate studies later this year as a scholarship holder at the Guildhall School of Music and Drama in London.

Baritone Timothy Nunn is a Young Artist with Pacific Opera and an Emerging Artist with Coast Opera Australia. His performances include the title role in the Phoenix Choir’s production of Mendelssohn’s Oratorio Elijah, the role of The Leader in Pacific Opera’s Production of Kurt Weill’s Down in the Valley, and Pangloss in a concert celebrating 100 years of Leonard Bernstein at the Sydney Conservatorium of Music. He also performed in the Ensemble for Patti LuPone’s concert Don’t Monkey with Broadway at the Sydney Opera House. In 2020 Timothy will be performing in Verdi’s La Traviata on Sydney Harbour with Opera Australia and will be a soloist in Willoughby Symphony Orchestra’s “Star-Spangled” Gala.

The Wagner Society NSW is a not-for-profit organization run to promote awareness of Richard Wagner and his contemporaries.

Any and all donations are greatly appreciated.